Since its founding in 1992, Coalition members have successfully restored hundreds of river miles affected by hydropower dams. Our efforts together have resulted in many environmental and recreational improvements.

The Hydropower Reform Coalition has used the federal licensing process since the early 1990s to restore rivers impacted by hydropower projects. It is hard to determine or quantify the impact our engagement in the federal licensing process has had. Our guesstimate is that our engagement has led to the improvement of environmental and recreational flows, improvement in water quality, fish passage, access, improved habitat for thousands of river miles, protection of thousands of acres of watershed land, and countless opportunities for boating, fishing, and other forms of recreation. In the American West (including California, Oregon, Washington, Idaho and Montana), we have engaged in more than a hundred federal licensing proceedings that have improved literally hundreds of river miles. Our engagement in these proceedings through “settlements” has resulted in billions of dollars of capital investments and other economic benefits, including more than a billion dollars of capital investment in one project in California alone. Since 2010 when we started keeping track of “river miles improved” in the West, we have restored or improved almost 1900 river miles.

Since our existence, we have signed more than 200 settlement agreements representing almost 20,000 MW of hydropower capacity that form the basis for the federal license for hydropower projects. These settlements have led to better management of water resources and better cooperation among stakeholders. In some cases, such settlements led to the removal of dams.

We have successfully removed dozens of dams using or hinging on the FERC licensing process, more specifically through the FERC’s decommissioning process or through settlements as part of licensing. Some examples of such removals include Marmot and Little Sandy Dams in Oregon, Mill Town dam in Montana, Bear Cove dam in Idaho, Elwha, Glines Canyon and Condit dams in Washington. We have also spent resources to remove the four dams on the Klamath River, which will likely happen in 2020 and would be the largest river restoration effort in the world. We played an instrumental role in negotiating the settlement leading up to the removal of dams as well as sustainable management of water resources in the Klamath Basin.

Using our FERC expertise, we have protected thousands of miles of river from new hydropower dams. We have fought off dozens of new dams in Alaska, Washington, Idaho, and California. Some examples of new dam proposals that are now dead include Shanker’s Bend in Washington, Oneida Narrows in Idaho, Watana dam on the Susitna River, and dozens of other dams on the Snake, Teton, Boise, and Weiser Rivers.

We played an instrumental role in the development of Integrated Licensing Process (ILP) in 2005 that allows for:

When we noticed some concerns with the implementation of ILP, we followed up with FERC in 2008 and in 2011 to report our problems with FERC. We then worked with FERC and other stakeholders to suggest ways to better implement the ILP. FERC adopted many of our recommendations and developed a best practices document.

Our engagement in licensing proceedings as well as our work with other stakeholders such as resource agencies and tribes has led to the FERC relicensing process from being an adversarial process to a more collaborative approach.

We fought numerous legislative attempts to weaken the environmental protections provided in the federal licensing process.[*] Examples include

We have engaged with the Department of Energy and other stakeholders over the last couple of years in their effort to establish a national vision for hydropower development. We have vigorously opposed construction of new dams as a way to increase hydropower generation. We have always supported adding hydropower at existing dams and improving efficiency as the preferred way to increase generation. To that end, we worked with the industry and members of Congress to pass a bipartisan legislation in 2013 that would make it easier to add hydropower capacity at existing dams and conduits. On numerous occasions, we have worked with the industry and relevant federal agencies to expedite the regulatory process for adding hydropower at Corps dams without compromising environmental values.

Here are some legal victories we and/or our partners have had in protecting rivers from impacts of hydropower development.

SD Warren, a company that was seeking a FERC license, argued that the water moving through hydroelectric dams was not a ‘discharge’ for the purposes of Clean Water Act and thus they did not require a water quality certification under CWA § 401. Coalition staff and members helped to organize 36 states, 8 tribes, and 48 NGO partners—among others—to weigh in to side with the state of Maine. The court disagreed with SD Warren’s contention and determined that such water does constitute “discharge” and that SD Warren must obtain a water quality certification from the state. This was another big win for us because if the court had sided with SD Warren, it could have meant that CWA protections could not be applied in hydropower licensing proceedings. We prevailed at a time when EPAct had just passed and agencies’ authorities had just been curtailed.

In a 2006 case involving the Cushman hydroelectric project on the Skokomish River in Washington, the DC Court of Appeals ruled that FERC has no authority to reject conditions submitted by federal agencies under §4(e) of the Federal Power Act (FPA) and that FERC is not required to issue licenses that guarantee the project will be profitable. The first ruling is crucial because FPA §4(e) provides a tool to resource agencies to protect and restore natural resources during hydropower licensing. The ruling favored the agencies and determined that FERC needs to either accept the conditions as they are issued by the agencies or not issue a license at all.

[*] A major setback happened in 2005 when, through the Energy Policy Act, Congress made it more difficult and expensive for resource agencies to put in license conditions to protect natural resources. However, we assumed a victory in 2006 in the Klamath relicensing where resource agency-recommended license conditions were upheld by an administrative court thereby discouraging other licensees from abusing the administrative hearing procedure.

Also, learn about our accomplishments in following six rivers basins: 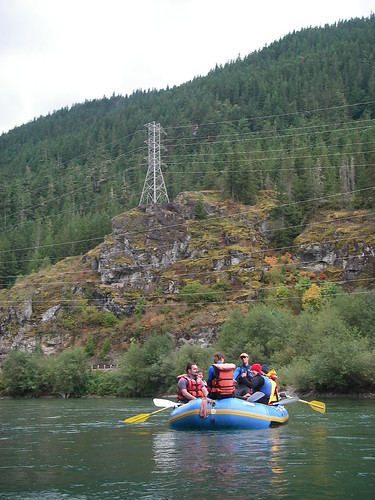